Missed any of my YouTube videos in the past few weeks? I've tried some unique Lay's chips only sold in Canada, eaten some ghost pepper Altoids, and overloaded on Hatch New Mexico green chiles. So at least I've only been partially stupid for a change. 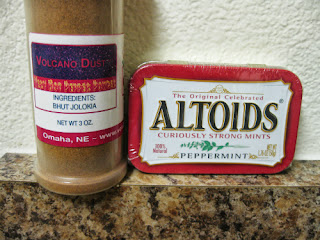 On July 30, Lays Canada started their own "Do Us a Flavour" contest with four finalist flavors. You can go to their Facebook page and vote until October 16. I'm sure a bunch of people are still shocked that Poutine did not make the final cut. I got my hands on all four finalist flavors and tried them. Check out the two videos below to see what I thought of each flavor!

The finalists were: Creamy Garlic Caesar, Maple Moose, Grilled Cheese & Ketchup, and Perogy Platter. All interesting. Which flavor or flavors sound good to you? Let us know!


I did a collab video with Von (check out her channel) down in Southern California and we ate the Carl's Jr. Super Bacon Cheeseburger. Of course, I had to add a twist to mine. Bacon soda, anyone?


The spicochist went back to his lab and did a s'mores collab with Naader Reda. Trust me, this was a damn good idea. Layer the damn thing like a lasagna. I'm sure it's been done by many people. I'd easily do this again and just eat it for fun.


McDonald's has some menu items unique to Hawaii. For example, the Local Deluxe Breakfast has Portuguese sausage, spam, eggs, and rice. There was even a haupia pie that looks like your usual apple pie, but contained coconut milk filling instead. Well, at least that's what it's supposed to contain. Apparently, it's not the best idea to top haupia pie with sriracha.


I tossed in a Spicochist Review in this set of videos. The World Market Chipotle Tortilla Dark Chocolate Bar sounds unique and is quite good.


Do you know a complete moron on YouTube? If not, now you do. Take one moron, roast four pounds of fresh Hatch New Mexico green chiles, add a pound of cornbread (with more Hatch chile inside), and voila: Hatch green chile overload.

Next time, I won't steam the chiles. It basically led to a slimy texture and it got off-putting real fast.


Finally, the spicochist is a huge fan of the L.A. Beast. If you haven't checked out his channel, definitely do so. I have a good feeling that there will be more L.A. Beast shoutouts in the near future. But for starters, this ghost pepper Altoids video was inspired by the Beast. I did a quick YouTube search before doing this stunt, and no one had posted such a video. I guess that means I just took stupidity to a new level.

And for the record, the video has already gotten way more views than I thought it would. Mega win.


Want to keep up with the latest videos and stunts? Please subscribe to my YouTube channel to get the latest! It's free, don't worry. :-)
Posted by Aaron at 11:00 PM