(UPDATE: Review edited on January 12, 2013, after going to another Jimmy John's in Vancouver, WA)

Jimmy John's is a national franchise of sub sandwiches, with over 1,000 stores nationwide as of 2011.

One of my friends had been talking about Jimmy John's for some time now, and for the longest time, I was convinced Oregon had no Jimmy John's. Well, lo and behold, there are actually several Jimmy John's in Oregon, from Portland to Springfield to Bend. I went to one of their three Beaverton locations. And yeah, there are even more locations in Washington.

Going inside the Beaverton spot, it felt just like your typical sandwich place: place your order at the window and your sandwich will be made for you. I went with an 8-inch Turkey Tom, foregoing the mayonnaise and adding Dijon mustard,  for $4.75 (as of January 2013, the price for this increased to $5.25).

Unlike chains such as Quizno's and Subway, you won't be able to toast your bread at Jimmy John's, nor will you get to go down the line to pick toppings. Instead, Jimmy John's prides itself on extremely fast service. It took no more than 20 seconds to get my sandwich. I think they set a world record, geez.

I enjoyed the fresh vegetables in the sandwich, especially the alfalfa sprouts. And of course, the service was lightning fast. Basically, the sandwich was OK. Looks like processed turkey meat, probably would add more dijon mustard to my sandwich.

In January 2013, I went to a Jimmy John's just outside Vancouver, WA. I ordered a Club Lulu with no mayo ($6.25 before taxes). Advertised otherwise with fresh sliced turkey breast, bacon, lettuce, and tomato. 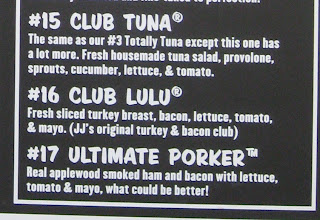 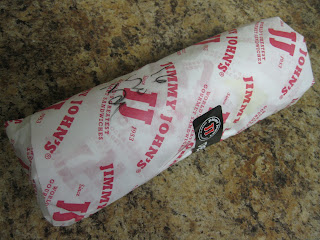 First of all, let's compare the bread on the two sandwiches I had. While the French bread in the turkey sandwich I had in 2011 had the "soft guts" removed, almost like a po'boy style, as you can see above, the sandwich I had in Washington in 2013 left the bread innards intact. It resulted in a more filling experience, much needed because the bread is only 8" long. I was better able to appreciate the starch overall. A huge "thank you" for that.

The Club Lulu I had featured bacon, so that wins points on its own. Perhaps I should have had this one two years ago instead, because this was pretty good. The bacon doesn't necessarily scream "fresh, hot, and crispy," but that's not always a bad thing. I won't necessarily do panda cartwheels while eating the sandwich, but the food does its job. I'd still toast the bread, but since JJ is all about being fast, I guess I'll have to give them a pass on that.

For the record, I love po'boys. This place doesn't advertise them, and it's not their style.

I'm curious on whether Jimmy John's changed their sandwich prep for the bread or if the regular sub sandwiches have always had the innards removed. I did order from the "Giant Subs" list (#7 to #17) this time, while the "Turkey Tom" is still on the regular 8" subs list (#1 to #6).

Jimmy John's also has a low-carb option, using a lettuce wrap instead of bread. But I feasted my eyes on the JJ's Gargantuan sandwich ($8.25) because it's supposedly their largest option. It starts with Genoa salami, capicola, smoked ham, roast beef, turkey, and provolone. Add onions, mayo (not for me), lettuce, tomato, and homemade Italian dressing. Honestly, I'm tempted to get one next time. You know, for the experience. In the interest of panda science. 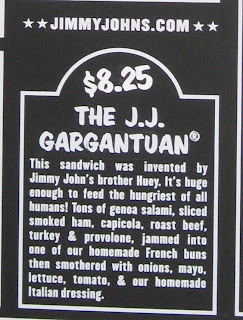 On both visits (2011 and 2013), I received fast service as advertised. If I were a college student trying to get to class, or any person in a hurry to get somewhere, Jimmy John's has proven to be a decent stop. My friend in Colorado swears by this place. After finally meeting him in April 2012, I think he needs to eat about three JJ Gargantuans a day.

I'm glad I at least gave Jimmy John's a second chance. I'm more in favor of this place now that I've at least stopped being a hardass on every single little thing. It may still just be an "OK" for me, but at least it's at the upper end of that level. 6.75/10
Posted by Aaron at 3:30 AM