I went back to downtown Portland on SW 9th (between Alder and Washington) for more of Charlene's waffles on a somewhat-chilly Tuesday morning. How can waffles be so dang addictive?! That and pancakes. Both of them = carb crack. Yeah, that explains everything.

This past November, I suggested (through Twitter) that a waffle involving peppermint candies be the December monthly special, and Charlene did just that. Unfortunately, my schedule forced me to miss partaking in that awesome idea. Not to worry. No request is ever too late here!

UPDATE: Here's their updated menu as of August 2013! 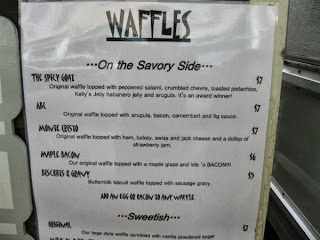 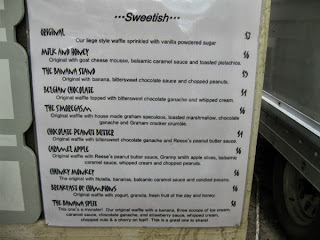 The December special: Crushed peppermint candies are kneaded into a waffle (instead of pearl sugar), then topped with Belgian chocolate sauce, whipped cream, and a peppermint candy garnish.

It's Christmas in...March? I was surprised at the lightness this waffle possessed. The peppermint candies elevated the waffle to sleigh-riding heights. The candies don't overpower anything, but its crunchy texture and minty jolt wanted me to wish for snow and some presents. Actually, the day I went, there *was* snowfall in the Northwest. And I count food as gifts. Thanks, Santa! You worked some overtime!

I don't have a Santa gut or flying reindeer, but I can happy panda dance! The waffle itself was satisfying, the firm outside contrasting with the softer inside. While the whipped cream didn't hold its shape, I'll take the blame for that one. The other components were likely still warm, and I kept it in a closed takeout container for a little while. Panda loses points!

Speaking of gifts, I also sampled the "Biscuits and Gravy" waffle ($4). A buttermilk "biscuit" waffle topped with savory sausage gravy. The gravy was spot-on in color, consistency, and flavor. I detected bits of ground sausage in there. A satisfying sensation. I guess that'd be a foodgasm, folks.

The "Customer Appreciation" promotion is one thing that makes Gaufre Gourmet stand out. Suggest waffle ideas to Charlene through Facebook and Twitter. If she uses the idea, your name will be on the waffle and your picture will go up on Facebook (complete with you holding the glorious final product).

The whole customer appreciation dealie, in general, is not a new concept, but I wish more places did this. It accomplishes two key tasks. It places priority on customer loyalty/satisfaction and, in this case, showcases waffle versatility. I've seen some pretty delicious, innovative creations, and you can view some of them on their FB page. You know if I ever tried to get in on that, something spicy will be involved. *insert sinister panda look*

Another reason I've been re-visiting carts is to give the cart owners a shot to really show what they can do. Charlene has taken full advantage of this so far. I'll be waiting for a spicy waffle to show its face one day.... 8.75/10
Posted by Aaron at 12:00 AM