I returned to China Blue on May 10, managing to persuade my friend to attempt the Lucky 7 Challenge. Seven different types of chicken, which could be anywhere from 6-7 pounds (but don't quote me on that...I'm not too good at guessing food weight). But yeah, I am an evil panda. 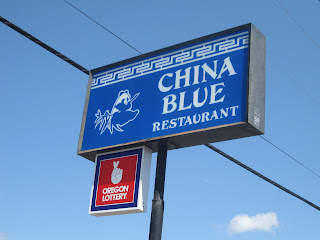 When we arrived, I quickly noticed the pot had grown to $700. Challenge went undefeated in April. 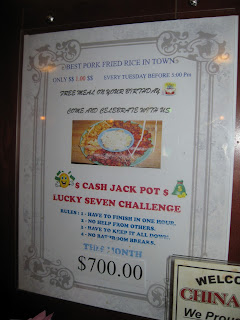 I became a bit more normal for a change and ordered a lemon chicken lunch special ($7.50). Added $1 by getting brown rice instead. I started with a tasty Egg Fu Yung soup (a quick scan online reveals various spellings for this one). Wonderfully prepared. 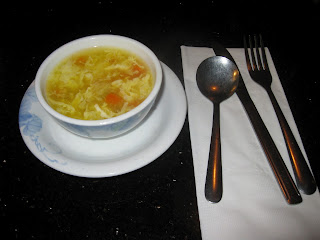 My entree featured juicy, delicious chicken, as usual. A very noticeable lemony flavor, but not overpowering. I finished my meal pretty quickly.

But my thoughts shifted to my brave (crazy) friend who attempted the Lucky 7 Challenge. But if my friend is crazy, does that make me twisted and sadistic for persuading him to do it? (Yes.)

Chicken varieties included hazelnut (signature item), orange, lemon, sweet & sour, Hunan, Mandarin, and General Tso. He made a small dent in the challenge before throwing in the towel. I munched on some of the chicken afterwards, then tanked the small blue bowl of hazelnut chicken. I wouldn't call it a lifelong dream to tank that much hazelnut chicken, but damn, was that tasty. 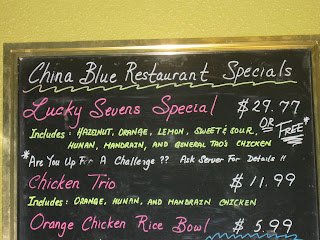 The entire family-sized platter will easily feed a family. You'll probably have a bunch of leftovers -- and you may not want poultry for the next few weeks. But for about $30, it's a pretty awesome deal.

Our servers -- same two people from my original visit -- were very good. My friend's birthday was the previous day, so he received a coupon for $10 off the Lucky 7 Challenge. Now that's a cool present! 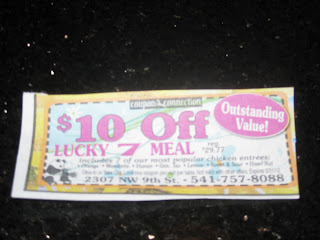 After this experience, I'd be screwed if I took this challenge on. Just consuming excess amounts of breaded, heavy-sauced, stir-fried chicken makes my stomach wince. But people have done it before. The cash pot is an ultimate motivator. We'll see what happens.... 8.5/10
Posted by Aaron at 11:30 PM