Pink & Black Waffle Shack is located on SW Washington St., in between SW 9th and 10th Ave., in downtown Portland, Oregon. Sadie opened this cart at the end of April. I passed by the cart once before, and after looking at some of the menu items, quickly made it a point to return and try it out. (NOTE: Sadie moved her cart to NE 13th and Alberta for a few months in late 2012) 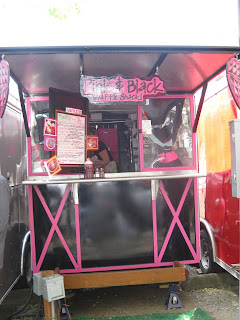 Compared to the other carts right next to it, you could miss Pink & Black Waffle Shack if your eyes wander at the wrong time. Yes, that happened to me. Maybe that was another reason for the hot pink?

Probably somewhere around eight or nine regular menu options, perfectly fine for a food cart. A few sweet waffle choices, a couple of savory ones, and even a build-your-own waffle option. You can just take a regular waffle as is for $3.

That Shack Shaker ($6.50; basically a pulled pork sandwich with waffles representing the buns) was sold out this time. Not to worry, there will be other days. I find it exciting to see items sold out. It spawns a quest to see if you'll be able to get it next time (see Big Egg's breakfast wrap as a prime example).

I went with the "Monkey Biz" ($4.50) on this visit, and added bacon for an extra $1.25. Bacon makes everything better. A golden-brown waffle gets topped with salted caramel, banana sauce, whipped cream, and granola. You can also get fresh sliced bananas if she has them on hand.

Bacon is the MVP again. The waffle was soft and inviting, perhaps a bit sweet just on its own. The banana sauce has that pureed appearance. I really liked the granola's crunchy contrasting texture here. A lot of sweet happening on this one. Meat crack is my friend for life. Mmm...salty-savory bacon.

I really should get to building that bacon shrine, but I don't really have much free time these days. I do worship the pig, though.

I tried two of her syrups. The red option uses cinnamon redhots candy and instantly gives you that pleasing redhot jolt. The other, more traditional-looking one is a maple-banana syrup. Brilliant! 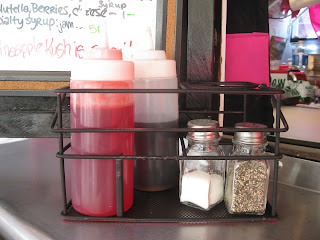 If you want additional toppings, Sadie has a short list on the menu, usually consisting of fruit, Nutella, almond butter, whipped cream, and more. Each item will add either 50 cents or a dollar to your total.

Sadie plans to be open Fri-Mon from about 11 a.m. until she runs out of food. It's a fairly major deviation from the other carts that may be open Tue-Sat or Mon-Fri. It also could mean good business, right?

It's something about pink and black that just work well together. Heck, hall-of-fame pro wrestler Bret Hart wore those colors in the ring. "The Excellence of Execution." Seems fitting! Can't wait to try the other menu items, especially that Shack Shaker!
Posted by Aaron at 11:30 PM