Stone Soup Bistro is located on the lower level of the Salem Public Library, where the old Queen of Tarts shop used to be. Owner Roxie Peronne worked for five years at Queen of Tarts, and has now capitalized on her dream of opening her own bistro. She is known for her soups, but I also had to try other items. Stone Soup Bistro held its grand opening on May 8, 2012. 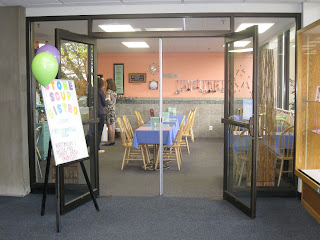 This place got its name from the classic folktale "Stone Soup" (which I remember reading as a kid). Quite appropriate, since the bistro is located within the Salem Public Library.

In mid-April, I saw Roxie (or rather, she saw me) at the Salem Saturday Market. I was happily surprised to discover she followed my blog and wanted me to check out Stone Soup Bistro when it opened. While I couldn't make it on opening day (surprisingly a slow one for Roxie), I decided to swing by on day #2. 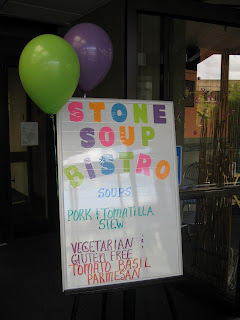 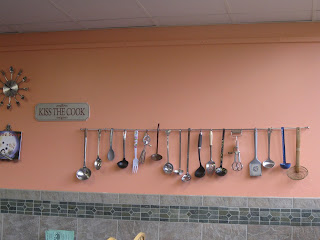 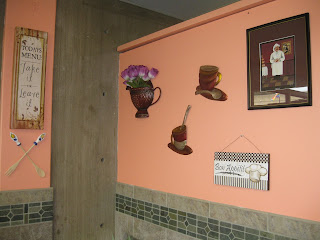 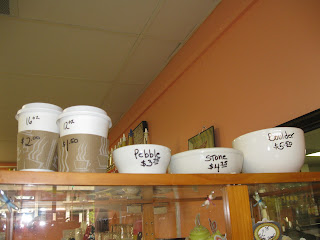 I popped in around 11:30. When I got there, perhaps just a couple of customers. By the time I left, a hoard of patrons were sitting or arriving. I'm quite sure Roxie had a much better second day.

I think it's great that Stone Soup Bistro carries vegetarian and gluten-free options for both savory and sweet items. With gluten-free options becoming more prevalent (and no longer being some stereotypical dry, unpalatable "food"), there should be something here for everyone.

Each day, there should be a vegetarian soup and a soup for the carnivore. Three sizes (a cup, a small bowl, or a large bowl). I went with a cup of their gluten-free Tomato Basil Parmesan ($3.75). Soothing, flavorful, and wonderfully prepared. Chunks of tomato lay suspended in a bisque-like consistency, then the fresh basil on top rounded out this panda-dancing symphony.

The soup came with a jalapeno, cheddar, and chive biscuit. I probably should have dunked that biscuit in the soup. Good, but perhaps a bit dry on its own. 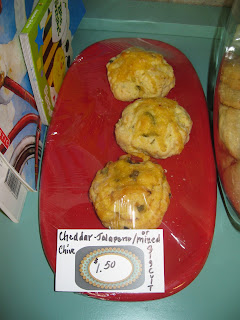 Pandas cannot stop after soup and a biscuit. The coffee's next! It's a house-blend, medium-roast coffee. My caffeinated product arrived at a good serving temperature (warm, not scalding hot). Ideally, it can be served a bit hotter. But I'm sure we don't want another one of those McDonald's coffee spilling lawsuits, right? 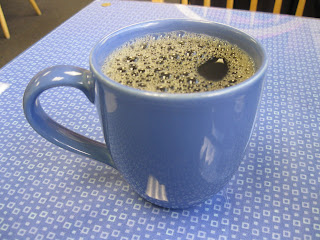 I think the fruit tart ($3.75) is still a fairly healthy dessert, right? It's a chilled cooked puff pastry, topped with some type of vanilla cream and colorful fresh fruit (strawberries, blueberries, and kiwi) on top. The dainty panda wanted to use a fork. The carnivorous panda got impatient and ate it with his hands. Chilling that puff pastry ensured the tart wouldn't collapse with all the fruit on top. Still relatively light and delicious. 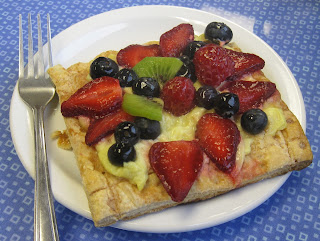 The chocolate mint brownie ($3) and the peanut butter crunch brownie ($3.25) angrily stared back at me for not picking them. Roxie also sells cupcakes from Sugar Sugar in the display case. 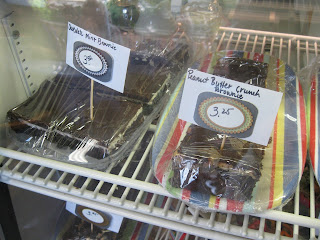 Roxie's very open to new ideas, so I quickly emailed her a list of suggestions. Obviously, more spicy options made that list. I think it's a pretty big menu, and it seemed like Roxie's helpers were still (predictably) learning the ropes this time around.
____________________

I popped in again the following Thursday and tried the cheesesteak panini with a cup of Roxie's French Onion soup. Full-flavored, thinly sliced roast beef, likely marinated for a substantial amount of time (or at least felt like such). The provolone had hardened a bit by the time it reached me, and I probably would like my bread a bit more toasted, but still very nice. Having softer bread still worked well with the soup.

Speaking of that soup, another delicious success. Perfectly caramelized onions, gooey cheese, and a piece of bread. I could eat that all day.

I'll be back in the future for more food. There's so much to tackle here! A very promising eatery for downtown Salem! 7.75/10
Posted by Aaron at 11:30 PM