Nikki & Lefty's is a Greek food cart located in downtown Portland, Oregon. Two people ("Lefty" and Nikki) run this cart. They opened in late July 2011 as a roving cart and moved to downtown Portland the following month. This was a three-person cart as "YoYo & Lefty's" until March 2012. 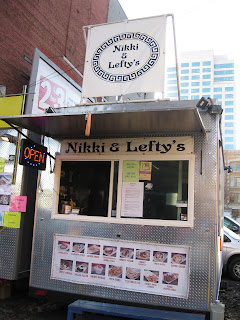 The chicken was juicy and tender, seasoned nicely. I appreciated the fresh lettuce, tomato, and red onion in my gyro, and the jalapeno ranch provided a little kick while not being overly rich. The pita was OK, although it could have benefited from a little more toasting on the flattop. Despite being advertised as a spicy chicken gyro, it wasn't very spicy -- at least for me. There is a kick in there, but it shouldn't harm anyone.

UPDATE: In December 2012, I returned to this cart with one of my friends. I opted for the traditional gyro ($7.50), then added feta cheese for 50 cents more. My friend got the "Super Greek" ($8), which is basically what I got plus fries inside the gyro. So basically, my friend got the better deal on the food. Lesson learned. 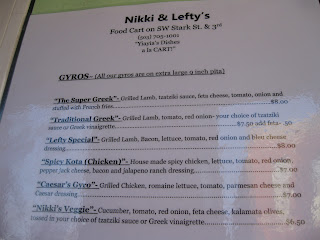 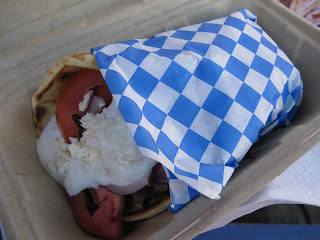 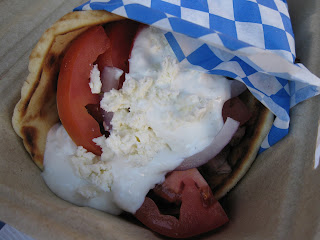 With frigid outside temperatures in December, we retreated indoors to eat our lunch. I personally enjoyed the toasted pita and the fresh vegetables. The lamb here is cut in chunky strips. While I appreciated the juicy meat, it could have used a bit more seasoning. My friend mentioned to me that he saw the meat being seasoned near the end of the cooking process.

The tzatziki was fine. Not bad, yet nothing to truly call home and go gaga like a fangirl's obsession with Justin Bieber. Honestly, I still believe feta cheese is a must on a gyro. It's cheesy crack to me. Yeah, that just sounds wrong.

This cart has loyal followers, so I'm very happy for them on that. They will be moving to The Row food pod in February 2013 to be alongside some successful food carts. That can only do a world of good for them.
Nikki & Lefty's also offers souvlaki, salata, baklava, and more. Putting fries in the gyro is an awesome idea. It's really a take on the fat sandwich idea that Big-Ass Sandwiches currently uses. If it works for BAS, it can work for a gyro cart!

A respectable spicy chicken gyro here and an OK traditional gyro. I might be back in the future. 6/10 (slight decrease from my original 2011 rating, which was a 7)
Posted by Aaron at 2:15 AM