(NOTE: I just learned in late February 2013 that San Diego Taco Company in Salem has closed. Really gonna miss eating a habanero burrito. At least I re-uploaded the habanero burrito video below, so I'll have nice memories of it.)

On the night of June 27, one of my friends from law school told me that San Diego Taco Company in Salem had a 2-pound habanero burrito challenge. The next day, even though I hadn't gotten to the gym (a rest day for me), I was hellbent on taking this challenge down. 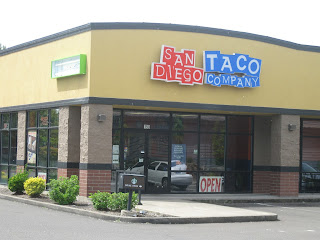 Jayson, one of the owners, started this challenge back at the beginning of April. He's a huge fan of Man v. Food, and that's basically what inspired him to create this burrito. 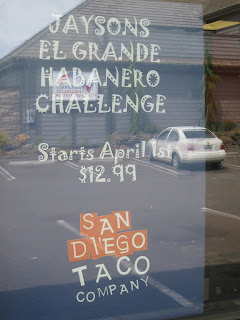 When I walked in around noon, maybe a few people were dining in. A few more patrons walked in for their takeout orders, presumably needing to head back to work.

First of all, there's a waiver. You know, the ol' "you can't sue us or hold us liable if something bad happens to you" dealie. There's also a spot on the bottom of the form to let the staff know who to contact in case an emergency arises. 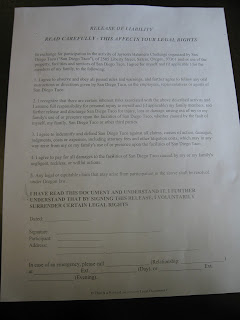 The El Grande Habanero Burrito Challenge Rules: 30 minutes, no bathroom breaks, no puking. You get a 32 oz. cup, and you can drink anything you want, refills included. You can substitute ingredients, but the total weight of the burrito must still weigh at least two pounds. You can add your choice of steak or chicken, or you can keep it vegetarian. Basically, rice, potatoes, refried beans, guacamole, sour cream, and cheese are among the burrito ingredients. The burrito costs $12.99, and you pay for it (perhaps in more ways than one) whether you finish it or not.

Winners get their picture on the "Wall of Flame" and a free T-shirt saying they "survived" the challenge. If you fail, you go on the "Wall of Shame." At the time of my challenge attempt, there were 7 winners. The adjacent "Wall of Shame" contained 53 unhappy campers. Jayson himself is among the sea of unsuccessful attempts. I have to give the guy credit for attempting his own challenge, because there are such chefs/owners out there who don't do so (probably a smart move to avoid pain and suffering). 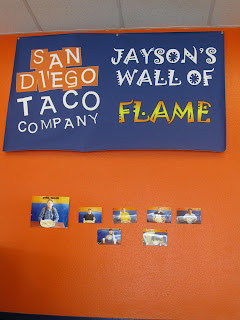 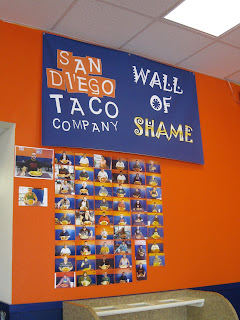 Not being a sour cream fan, I nixed the sour cream and added lettuce. Pandas love added nutritional value, a.k.a. rabbit food! I also got chicken, since poultry generally sits lighter in the stomach than steak. I also wanted a balanced burrito, not wanting excess carbohydrates inside that giant tortilla.

Oh, and we can't forget about the habaneros. A sea of sliced habaneros and serranos fit into every nook and cranny. The red sauce that smothers this burrito, from what I remember, also stamps a habanero presence. After getting some water and quickly commandeering a nearby table, I signaled to Jason that I was ready. I dug in fairly fast, but still a controlled pace. 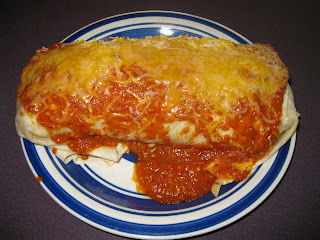 A pretty damn good burrito, considering the plethora of habaneros and serranos. Normal people probably would feel the pain a few bites in, but I practically ignored any uncomfortable sensations. While my face might have started to exhibit signs of perspiration and despair, my brain apparently can't comprehend it -- at least for habaneros.

The first half of this thick burrito got slaughtered in about 4-5 minutes. Knowing this was just as much a quantity challenge, I was hellbent on not drinking a lot of liquids anyway. I ended up taking a couple of sips, but only to get the food down. I would easily beat the time limit, but I'm such an impatient panda. I kept staring at the ceiling and chewing, basically bored out of my mind. At that point, I basically wished I had brought my iPod to start dancing in my seat.

Eventually, I finished the burrito in 12:21, good for the challenge's 8th winner and second-fastest time (as of June 28). Perhaps I would have posted a better time had I went faster and chugged more water. Maybe Jayson was right, even more guacamole would help. Still very tasty, so no complaints. 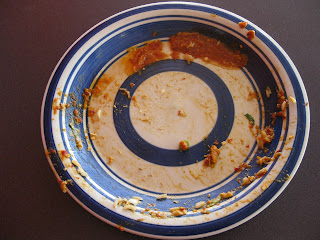 NOTE: The video has been re-uploaded! Thank you to all for your understanding! :-)

The burrito had some kick, but wasn't too bad. Of course, after basically igniting my insides with ghost peppers, Trinidad 7 Pot peppers, and extract over the last two years, this was mere child's play.

I realized that my photo for the wall probably makes me look like I'm in agony. It was more the burrito's filling nature.instead of the actual spice. But rest assured, spice and quantity can be a lethal combo for food challenges.

You love heat? Take this challenge on. Tell them some crazy food blogger named Aaron goaded you into doing so. 7.75/10
Posted by Aaron at 11:00 PM