I returned to La Perla Tapatia on July 12 to take on their largely unadvertised 20-taco challenge. I wasn't totally fond of the experience last fall, but since then, I found out that a new management team runs La Perla. So naturally, I figured, why the heck not? Was the panda able to pull it off? 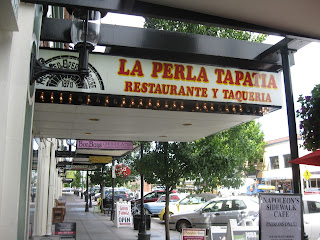 I met a friend in downtown Salem -- who luckily didn't mind seeing some moron stuff his face like some competitive eater wannabe.

Basically, the challenge is 20 of La Perla's 99-cent tacos in 20 minutes. Winners get the meal free, while the people who fail cough up the total bill (about $19.80, if my basic math is still good). The pastor wasn't ready yet, so I got 10 carnitas and 10 pollo. I had to move to the bar area so they could watch me. Four plates of five tacos each came out. The tacos looked good when they arrived, but a pretty large helping of meat, onions, cilantro, and salsa on each double corn tortilla. 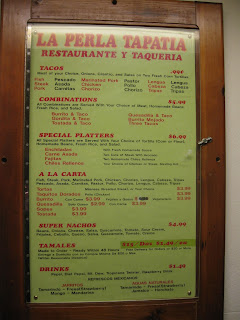 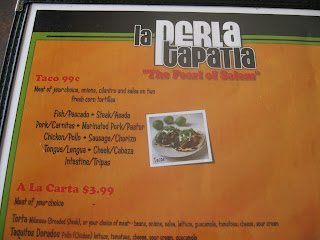 My friend enjoyed the complementary salsa and chips we got. Unfortunately, I had to save room for all the taco madness. 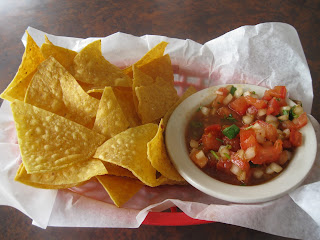 I was surely getting my carbs and protein on this meal. Personally, just downing 40 corn tortillas by themselves would just make me want to avoid additional tacos for the next 20 years.

I stood up the entire time, downing the carnitas tacos as fast as I could. I kept a great pace for the first few tacos, but naturally slowed down. Since corn tortillas are denser than their flour counterparts, it got heavy in the stomach faster than I had hoped. I got to about 15.5 of the 20 tacos, then basically threw in the towel with about 30 seconds left, knowing I'd fail anyway even if I kept going.

Here's video of the attempt!


I wasn't completely full (maybe 80-85 percent there); the flavor fatigue got to me first. In hindsight, I probably shoulda mixed up the variety even more, as my pro eating buddies mentioned to me later. It may have helped, but I'm not sure if that would have led me to victory. I'd have to average a taco per minute for 20 minutes -- a daunting task even if those tacos were of the dinky variety. Normal humans probably don't wolf down 40 corn tortillas in one sitting, either. Stupid panda.


Without the time limit, I might have been able to push 20 down, but I'd likely need anywhere from 40 minutes to an hour. At least I know competitive eating is likely not in my future.

The pork was moist and very tender. On the other hand, the shredded chicken was quite dry. Both proteins could have benefited from more seasoning. Ugh. Hopefully, the overcooked chicken and blandness are anomalies.
__________________

I emerged from hibernation a couple of days later, after the taco coma wore off, to try those dessert nachos. Flour tortillas are cut into tortilla chip-sized pieces, then fried up. They get sprinkled with cinnamon sugar and topped with chocolate sauce, caramel, and whipped cream. In all likelihood, I'd guess it's canned/bottled chocolate sauce and caramel sauce, but hell, it's just $2.99. The price alone pleases the panda.


The nachos were great, a good choice for anyone with a sweet tooth. I'm not sure if that item was on the menu when the previous management team was there. From my experience, the dessert options are NOT on the menu that you get when arriving. so just remember to ask about them. Hopefully this changes.

I was a bit disappointed in the service on this dessert visit. I sat more toward the back of the restaurant. The place wasn't packed, yet once I received my dessert, my server vanished to other tables. No refilling my water glass, no checking to see how I was doing. Was it because I only ordered a $3 dessert? I believe another server came by, and I mentioned I was finished with my plate. She bussed the table behind me and then left. Could have taken my empty plate as well to be efficient.

The food isn't bad, but could be better simply with more seasoning (and not overcooking the chicken). The dessert nachos in particular were great, and frankly, those saved the day because otherwise, I wasn't impressed. The service may be hit or miss, depending on the server. 5/10
Posted by Aaron at 11:00 PM