Two Tarts Bakery is located near the corner of NW 23rd and NW Kearney St. (Alphabet District) in Portland, Oregon. While on a sugary bender in the Rose City, I stopped by to keep my jittery high going. 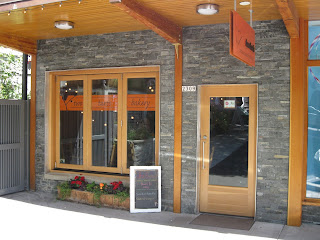 According to their official business website, there are around seven people running this place. Elizabeth runs the show. I've noticed they originally used foul language in their "About the Tarts" section, which seemed to offend some people. Personally, I don't care, but understand that businesses should remain professional and refrain from such language. It was all meant in good fun anyway.

Anyway, the petite baked goods in the display case are generally 80 cents apiece. I tried the Sesame Ginger Macaron and the Hazelnut Baci, the latter being shortbread-domed cookies sandwiching some chocolate ganache. 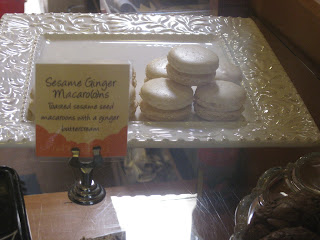 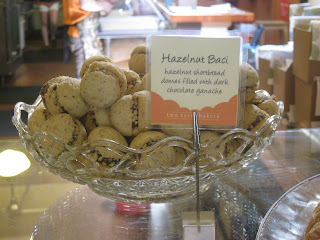 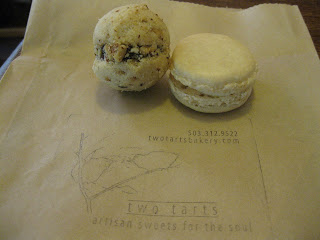 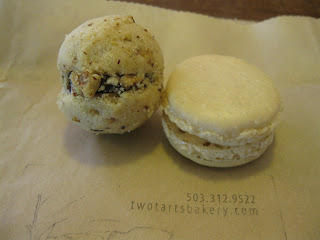 The macaron had pleasing, subtle flavors, with the meringue being the reason for its light, airy qualities. The ginger buttercream in the middle wasn't overpowering, making me even more of a threat to that macaron when I'm around. That's right, I could see myself eating a tray of that. Sweet treats all consider me Public Enemy #1.

As for the Hazelnut Baci, that was my favorite of the two. Shortbread, hazelnuts, and chocolate just work. Who cares why. They just do. Panda very happy.

In the summer, Two Tarts Bakery apparently makes a couple of ice cream flavors. On my visit, they had Candied Ginger ice cream and Snickerdoodle ice cream. Both were pretty good, although I would have wanted more intense flavors in the snickerdoodle option. I liked the tiny candied ginger chunks embedded in that selection. 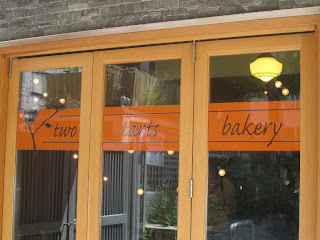 The Chocolate Chip Fleur de Sel cookies and the Peanut Butter Creams are also extremely popular choices. They both got a pass this time. They may not avoid my panda jaw next time. *evil grin*

Two Tarts is a sugar lover's paradise. Just be sure the food coma remains temporary. 8/10
Posted by Aaron at 11:30 PM