Next weekend (July 27-29), OregonMania II commences. My good friend Naader Reda returns for more food glory, and he has especially been working very hard to get local TV, newspaper, and radio coverage for his food stunts. It should be an incredible three days. 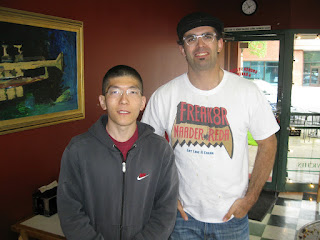 As usual, I'll plan to put up blog posts to chronicle each day. Right now, my availability for the event is unknown; seeking that steady job comes first. At the very least, I'll still be able to get the news from Naader himself. I'll probably be putting up those blog posts in early August.

Think about it: trying to do one food challenge is taxing enough on the body. Try doing several challenges over consecutive days -- even multiple challenges in one day! That's some rarefied air, to say the least.

But the media exposure is also about promoting the local businesses Naader is heading to. It would be amazing press and hopefully will boost their respective revenues in this tough economy. When The Statesman Journal covered Naader's successful 12-pound pizza attempt at Church St. Pizza on Memorial Day, it was the most popular article on the newspaper's website the following day. While the article has since been removed from the website, Church St. Pizza's Facebook page should still have photos.

Naader and I attempted to get two places to allow us to do team food challenges, but it doesn't look like either will happen. Hopefully a team stunt will take place anyway.

FYI, this video shows what Naader did during OregonMania I (Memorial Day Weekend). The challenges he defeated still make me shake my head in disbelief.


Like last time, Naader plans to videotape his OregonMania II challenge attempts and upload them to his YouTube channel, where he recently surpassed 2,100 subscribers. He's a part of the Wreckless Eating YouTube webshow (over 20,000 subscribers!), and his accomplishments are posted on food challenge websites such as EatFeats.

READ BELOW FOR THE OFFICIAL PRESS RELEASE!

PORTLAND, OREGON — In the last three years, Naader "Freak8r" Reda has conquered over 200 restaurant challenges. Adam Richman may have eaten a ton on Man v. Food, but Naader is the Adam Richman of reality. He lives this. In 2011 alone, Naader handled 100 restaurant dares, winning 97 of them. Naader will spend next Friday, Saturday, and Sunday living up to his billing as All Pro Eating's #1 World Ranked Eating Challenger (http://competitiveeaters.com/challenger.html), splitting his time between eateries in Salem and Portland. Can the restaurants of Oregon hold him back?

There's an 8-pound dessert pizza waiting for him at Church St. Pizza (Salem), a 2-pound habanero burrito at the San Diego Taco Company (Salem), a huge sandwich at Mad Greek Deli (Portland), a 72-ounce steak at Sayler's Kitchen (Portland), and a big doughnut at Voodoo Doughnut. What won't this eating champion put away in a weekend?

Naader Reda is a history teacher by day, but on vacation, he eats big and takes the sky to the limit. He's hoping to make some history of his own next weekend, and will enjoy a lot of good food and travel in the process!