Casa de Tamales (a.k.a. Canby Asapragus Farm) is a food booth located at the Wednesday and Saturday Markets in Salem, Oregon. They are otherwise located on SE Main St. in Milwaukie, Oregon, and are known for their huge omelets and delicious tamales! 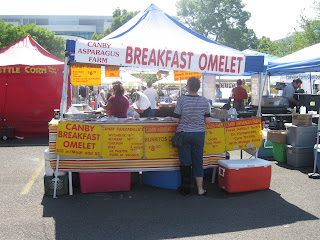 I had passed this booth several times and finally decided to stop here for a hearty meal. I love Mexican food, so it was quite the chore on picking one item. They make each dish to display at the counter, both to show what each choice looks like (helpful) and probably (inadvertently) make the decision that much harder.

Ultimately, I went with the Farmers Market Omelet ($10), adding chicken for $3 more. It's a three-egg omelet, with heaping amounts of grilled vegetables. The omelet gets immense as the eggs spread thin on the flattop. It's served with a corn or flour tortilla on the side (flour for me), plus a homemade salsa containing tomatoes, tomatillos, and jalapenos. 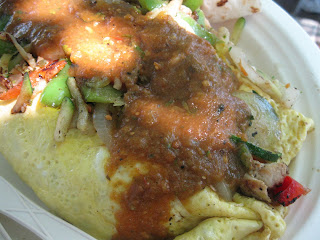 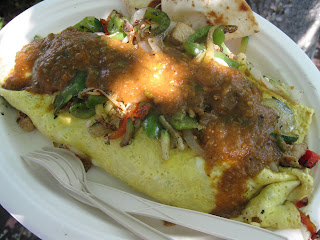 The size and filling nature of this dish makes the $10 to $13 price tag much more reasonable. Personally, I would have liked a bit more seasoning on the vegetables and the chicken. I probably ate an entire crop of vegetables here, which really left me hunting for the moist chicken. The salsa was great, bringing much-needed flavor and possessing that slight zip from the jalapenos. I felt like such a healthy panda afterward!

I had also considered their famous homemade tamales. It's $6.75 for one, and there are a few fillings to choose from. Also, the burrito ($8) includes a bunch of rice and beans; add a buck each for cheese and/or meat. Casa de Tamales also serves a Taco Plate of three small Mexican tacos ($8).

Go to their official website for more information; they also have Facebook and Twitter accounts! I'll probably go back and give them another shot to really pump up those flavors. 6.5/10
Posted by Aaron at 11:30 PM