After my visit last October, I knew I would come back to Local Girls to try their shave ice. I just wanted to patiently wait until Mother Nature blessed Oregon with better weather. After a winter hiatus, Local Girls reopened in April, and the summer sun finally showed itself in early July. Emily was running the cart solo on the day I arrived. 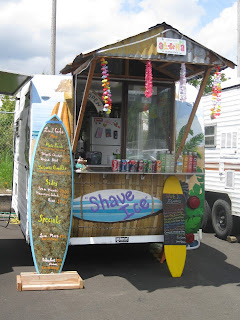 Being from Hawaii, I'd probably have a good idea on what real awesome shave ice is. I ordered a small shave ice with Tiger's Blood syrup ($4), adding "the works" -- vanilla ice cream on the bottom and sweet cream on the top.

Emily knows how to construct a shave ice behemoth! The people before me and after me marveled at how imposing a small shave ice appeared. 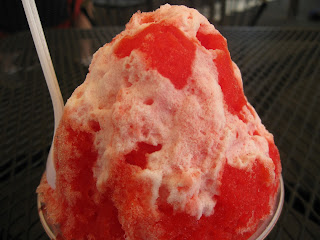 More importantly, the shave ice was excellent. Properly shaved, to the point where that ice literally melts on your tongue. "Tiger's Blood" is a strawberry-watermelon flavor, with a hint of coconut. It's a great choice if you crave something with that refreshing, tropical vibe. The addition of vanilla ice cream and sweet cream on your shave ice basically transformed this one into one of those slush floats I remember having at Byron's Drive-In all the time.

I stupidly tried to speed-eat this one. Brain freeze set in. Oops. After a temporary stoppage in the action to recover, I then finished it off. Really a great way to end the day.

I still haven't tried their Loco Moco (served Fridays) and their Kalua Pork (served Saturdays). Guess I'm trying those next when I return! 7.75/10 (pretty much the average of the teriyaki chicken plate I had last October and the great shave ice this time)
Posted by Aaron at 11:30 PM