I returned to Namu in early July, deciding to give their cart another shot. I wasn't very fond of the pulled pork plate last summer, but I vowed to put all that aside and start a clean slate this time. I hoped they would come through. 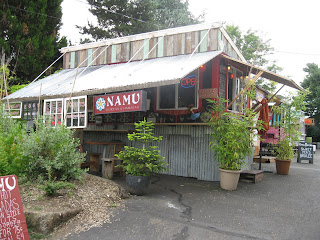 The design of the cart had changed since last summer, brightening up what I feel is a primitive, shack-like setup with some paint and a new sign. 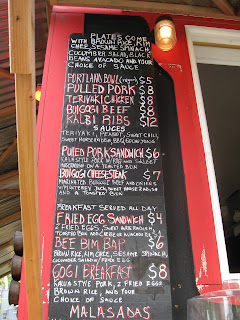 Malasadas caught my eye first. Yup, they actually used the term we'd say in Hawaii. Of course, they had to put "Hawaiian style donut" underneath just so anyone unfamiliar with the name probably wouldn't be all nervous and perhaps butcher "malasada." FYI, a malasada is a Portuguese treat that is extremely popular in Hawaii. Portuguese immigrants that worked in the Madeira islands and the Azores brought it over to Hawaii in the 19th century. Guess that's enough foodie history for the year for my brain. 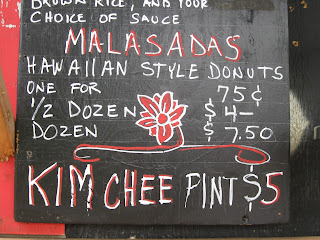 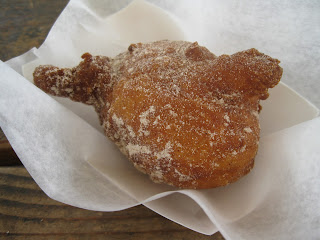 The malasadas here are 75 cents and very good. A great job to get this treat light, airy, and fluffy. The cart owners here dust it with sugar and cinnamon. Being a self-confessed cinnaholic, I'd certainly get this one again. Still, the malasadas I can get back in Hawaii are much larger and similarly priced (maybe up to a buck). The original malasadas I grew up eating in Hawaii don't have cinnamon on them, but places like Leonard's will create various types, even "filled" malasadas.

The "Bee Bim Bap" ($6) here is a vegetarian take on this famous Korean dish. No meat is added; instead, there's sesame spinach, pickled cucumber salad, kimchi, and a fried egg over brown rice. I requested gochujang (Korean chili pepper paste/sauce) on this one. If anything, it's a very healthy rendition! 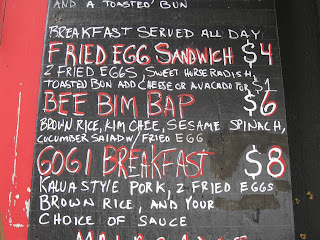 The flavors were excellent. Spinach cooked wonderfully, then cooled. The kimchi and cucumber salad, unlike last time, were executed much better. A nice, controlled tang.

The only disappointment was the fried egg. Normally, bibimbap includes a raw or overeasy egg so that yolk can help combine all the other ingredients. This time, the egg was basically overhard.

As much as I dig this vegetarian version, the carnivorous panda thinks meat should have been added. I guess I could always get a side of bulgogi or something to add to this one. Or I wonder if kalua pork works here. Couldn't hurt, right?

Overall, Namu left a much more positive impression than my experience last summer. The flavors were great this time. The egg botch is clearly fixable. Add some meat here, and I'll really be a happy panda. 6.75/10
Posted by Aaron at 11:30 PM