Armando (the owner since circa May 2011) and a bunch of his staff (if not all) are San Diego natives. Thanks to a never-say-die attitude, Armando has transformed Aiberto's from a less-than-stellar reputation to a successful business. Aiberto's now receives rave reviews on Yelp and EatSalem. Definitely a feel-good story! Naturally, I had to try them out. 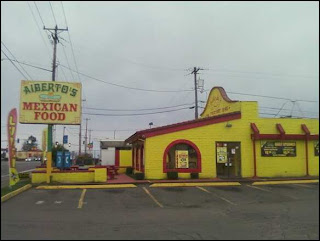 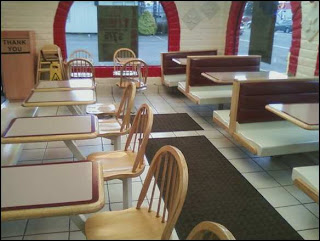 The first thing I noticed driving up to the place (besides the yellow exterior) was the cheap daily specials. Burritos for $2.99? Platters for $7.99? Dang! Do they even make much money after costs?

I got a Pollo a la Diabla burrito ($3.99): spicy grilled chicken pieces, guacamole, onions, tomatoes, and cilantro in a large flour tortilla. The best part: they can customize the spice a bit more on the burrito (they upped the heat for me). Whoa wait, less than $4 for a fat burrito? Score! 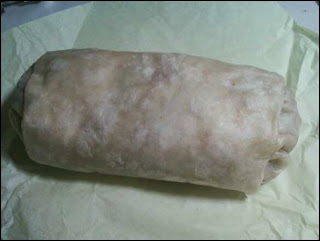 I virtually blacked out from sheer foodie bliss. The moist chicken zapped a lightning bolt of flavor in my mouth. I've had a lot of burritos in my life, and I'm dead serious when I say I cannot recall having a better one. Combined with the onions, tomatoes, cilantro, and guacamole, this burrito was not only beautiful to look at, but I almost felt guilty for eating it -- almost. A perfectly steamed flour tortilla rounded out this epic experience. There was a little heat, but it's not overpowering. The burrito paired extremely well with Aiberto's spiciest hot sauce. The sauce possessed a smoky flavor that added even more flavor dimension.

This bad boy had some weight and girth on it! I still coulda eaten more than one of these. *looks down* (Shut up, stomach...no vote for you!)

I told the man running the register that I enjoy spicy food, so he let me sample a whole jalapeno with salt and a lime wedge. The pepper may have also been slightly blistered on the flattop or over direct heat. I coulda eaten ten more of those. Crunchy, with a little heat. The salt balanced the sour citrus lime flavors; the latter also proved refreshing on the palate.

Me: "So what's your most popular breakfast burrito?"
Owner: "Bacon. Bacon is the most popular."
Me: "Then I'll have one of those!"

Come on, shame on me. Bacon is unofficially meat crack. This portly burrito had diced bacon, french-fry strip potatoes, scrambled eggs, and melted shredded cheese. Everything was just perfectly incorporated. Especially when paired with the same smoky hot sauce I had with my diabla burrito, all I needed was a napkin and a few minutes to polish the meal off. Simple seasoning and extremely satisfying, a great post-workout meal! Hooray for proteins, fats, and carbs! Heck, I braved the icy roads just to get to this place. And I'd do it again to get more.

Top-notch service on both visits. Oh, did I mention that Aiberto's is open 24 hours? And I don't live too far away. My stomach may hate me for being a mass glutton. Sorry, stomach, I don't care. This may be the place that finally gets me fat.

Aiberto's is touted as "San Diego's Best." No, I'm not from there, but I'm still inclined to agree. Hands down, the best Mexican restaurant I've been to. Holy burrito...thank you Aiberto's. Now I don't have to make a trip to San Diego just to get amazing Mexican food. 9.5/10
Posted by Aaron at 1:00 AM