Sin Wagon is located near the corner of SW 5th and Oak in downtown Portland, Oregon. Chad, the owner, also prepared great food at "Yarp?!" (a pasta cart that closed in summer 2010). Chad had the drive to be his own boss and sling some great food again, and hence, Sin Wagon opened just a few months ago. 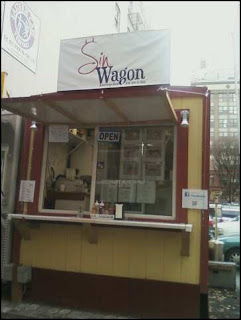 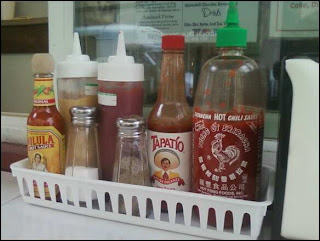 There are three options for the fried mac and cheese balls: the "classic" (just mac and cheese), incorporate some jalapeno, or add bacon. I asked Chad if it was possible to take BOTH the bacon and the jalapeno. An affirmative response! Thank you! Best of both worlds!

Chad apparently hadn't prepared the mac and cheese balls for the fryer yet, so we basically chatted to pass the time. Sin Wagon was open on New Year's Eve -- and into New Year's Day. Chad said he got slammed with orders, his most profitable day (er...night) to date. Anyway, the mac and cheese (with bacon and jalapeno) is formed into a ball, then egg wash and Italian bread crumbs. Chad used to freeze the mac and cheese balls beforehand, but learned they take more time to cook (as opposed to unfrozen product). A few minutes in the fryer, and my custom order was ready.

OK, so I thought this was just a side snack, but these were some fairly nice-sized balls (keep your mind outta the gutter!). The thin fried layer possessed that incredible golden brown color, encapsulating a shelled pasta mac and cheese inside. Despite being fried, the mac and cheese balls were not greasy, a sign of ideal frying. The jalapeno added color, crunch, and heat. Do we even need to describe what bacon added? We can say "Bacon FTW!" and call it a day.

I think extra crispy bacon is the only thing that would improve my experience. It's merely a personal preference, and there's a skill to making bacon crispy without completely rendering it to carbon. But yup, this was a damn good snack (yes, I ate elsewhere before this).