Emame's Ethiopian Cuisine is located near the corner of SW 9th and Washington in downtown Portland, Oregon. Sosena is the cook running Emame's, which opened around December 2010. Admittedly, I have not seen very many Ethiopian food places around. I personally only know two places (as of this post) that have Ethiopian cuisine in Portland, Salvador Molly's being the other. For reference, I viewed a nice video on YouTube that features Emame's...check that out as well! 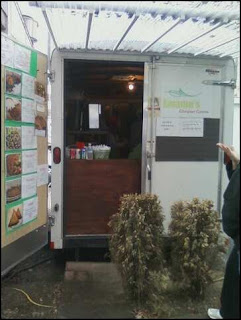 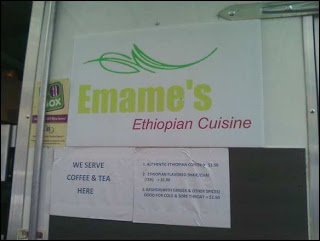 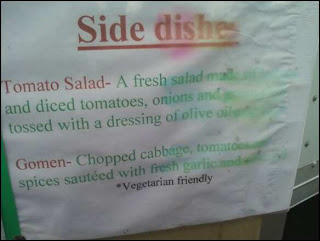 Anyway, my taste buds apparently yearned for the "world foodie tour," so downtown Portland was the answer.

I got Ethiopia's national dish: the Dora Watt ($6): chicken stewed in a "berebere" sauce. Berebere is a blend of spices that get added to the sauce, along with butter, onion, and chicken. Emame's makes their own berebere from scratch, and may include chiles, garlic, ginger, korarima (a type of cardamom), fenugreek, and pepper. You'll get a hard-boiled egg with this meal, and your option for some cheese (which I happily accepted). I got a side of gomen, basically a cabbage salad.

Oh, and don't forget about the injera, a spongy flatbread that also becomes your utensils. Emame's supplies forks and spoons, but I wanted to go traditional and get my hands dirty.

I liked the sauce's consistency. The spice blend is not something I'm very used to, but I'm cool with it. The butter adds some richness to the dish. I'm uncertain if the sauce needed a bit more salt or some other seasoning, but for whatever reason, I just thought something was missing. The chicken was wonderfully cooked. The dish overall shouldn't significantly affect anyone's taste buds. Mine just woke up to (attempt to) appreciate the flavors, then went back into hibernation.