Pine State Biscuits has two locations in Portland, Oregon. The older spot is found on SE Belmont (opened in late February 2008) -- actually not far from the Good Food Here pod. The other location -- the one I went to -- is on the corner of NE Alberta and 22nd. It is an award-winning dive that has been featured on "Diners, Drive-ins, and Dives."

Pine State Biscuits was started by Walt, Kevin, and Brian, three guys from North Carolina who became great friends in college -- yet each of them really missed that true Southern cooking. Pine State's golden buttermilk biscuits utilize shredded (frozen) butter and are made by folding the rolled-out dough into layers. The result...soft, buttery goodness that will rival or soundly defeat any other biscuit. 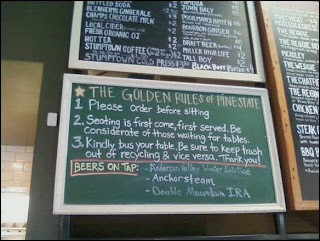 The signature item here at Pine State Biscuits is the "Reggie" ($7), their biscuit sandwich with fried chicken, bacon, cheese, and their signature gravy (choice of sausage or mushroom). But I'm like a ton of other people who go even further. The "Reggie Deluxe" ($8) is basically the "Reggie" with an egg in it. Oh yeah!

FYI, the name "Reggie" apparently came about because Brian wanted to name his son Reggie, but his wife didn't approve. Hence, we get a "Reggie" biscuit sandwich! (I got sausage gravy, as a note)

This was seriously one of the best biscuit sandwiches I've ever had. The gravy rockets this dish to the next damn galaxy many light years from here. It's a perfect, creamy, savory gravy that I would freakin' take a bath in (OK, maybe not). The chicken was fairly moist -- with a light, thin breading -- and fried to a lovely golden brown. The chicken breading also incorporates a little hot sauce...brilliant! I think my only (very minor) deal would be to melt the cheese on this Reggie Deluxe.

*light bulb* You know, I should eat a Reggie Deluxe while chugging hot sauce. I'm a sick, sick man.

The biscuit itself was amazing, baked perfectly and the buttery flavor unquestionably rocked the foodgasm world. Yup, I screamed "unfairly awesome!" as I ate this. Pine State Biscuits now has one more member on the "Reggie Deluxe" bandwagon.

I have yet to try the other menu items for a more complete experience, and the McIsley ($6) looks real good...fried chicken, pickles, mustard, and honey. Not sure why it took me this long to try Pine State out, but I'm so happy I did! 9/10
Posted by Aaron at 1:30 AM