(UPDATE 5/10/12: Food Carts Portland reports Pastrami on Rye has closed. New owners have taken over the cart, serving Salvadoran food, such as pupusas.)

Pastrami on Rye is a family-run food cart located on SW 4th and Hall in downtown Portland, Oregon. 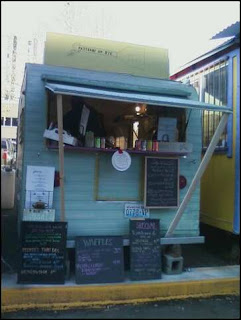 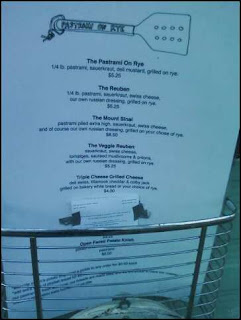 It just so happens I was at the Portland Soup Company cart earlier when two women mentioned that I also had to try the food at Pastrami on Rye. They were fond of the grilled cheese at this cart, but wait...what was that I saw? Reubens? Pastrami? Jalapeno mac and cheese? Good grief, I'm sold.

I ordered half a pastrami sandwich on marbled rye (because well, the name of the cart is Pastrami on Rye) and a side order of their jalapeno gruyere mac and cheese ($5.50). FYI, Pastrami on Rye has five types of rye bread to choose from. I received my food in a paper bag with the cart logo on it! Cool beans man....

The bread was beautifully toasted, and the sauerkraut did not overwhelm my palate. I find marbled rye very appealing in appearance. The pastrami was the star, a mini explosion of black peppercorn power with the perfect savory, salty pastrami. The sandwich had deli mustard in there...yes! Gotta have the deli mustard! I could easily eat that sandwich every day if I wanted to.

The jalapeno mac and cheese was also quite successful. A nice ratio of macaroni to cheese here with the pasta right around al dente. I found the gruyere a bit milder in flavor, making me think it was a "younger" cheese that promotes more creaminess and nutty tones. The dish screamed comfort food all around. The jalapeno livened the dish up (in color and taste) and contributed the texture contrasts I crave.