After constant positive word of mouth regarding Koi Fusion, I decided to give them another shot (the taco I had the first time was fine, just not mind-blowing). Bo Kwon and his staff had opened a kiosk/hut in Bridgeport Village. Since it was on my way home from Portland, I figured it was as good a time as any. 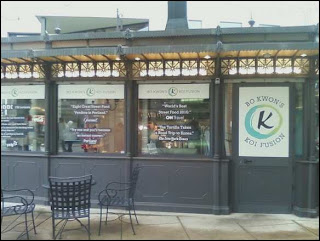 I wasted little time, getting a spicy Bulgogi Beef Koi Rice Bowl ($7): Koi's kimchi fried rice topped with vegetables (cabbage slaw, cucumber spears, bean sprouts, and cilantro), and Korean "salsa." A fairly generous helping of beef was added to the side. And yes, instead of beef, you can get chicken, pork, tofu, or kalbi short ribs.

I originally thought about getting a burrito, but I had already seen enough tortillas for one week (mmm, monstrous tortilla noshing at home!). The rice bowl is basically the burrito without the tortilla, so it's still all good here.

The beef was amazingly good, very tender. The marinade (courtesy of Mama Kwon) packs a sweet-savory blast of awesomeness. The beef by itself would be a home run; I could (almost literally) eat several large containers of meat all day. I thought the crunchy pickled vegetables, while good, had just a bit too much influence for me. It tried to battle the beef a bit too much for the superstar role.

Meanwhile, the kimchi fried rice, while possessing a lovely orange tinge, only had subtle flavors (if any). To be fair, I'd assume this was the case so the beef could have its moment in the sun. The spice on the overall dish was noticeable, but still considered mild for me.

I appreciate and respect Koi's success. There's a reason they have multiple trucks and this new kiosk in Bridgeport. Check them out! 7/10
Posted by Aaron at 1:00 AM