Rosie's Scottish Goodies (Salem, OR) serves fresh baked goods, candies, and jams. She has sold her goods at public markets in Salem and Dallas, Oregon, since 2010. I sampled some of her cookies at the Wednesday Salem Farmer's Market.

As one would probably expect from the business name, Rosie is the owner -- and she's also Scottish. She bakes all her goods in a certified kitchen in Salem. Everything is made fresh.

I tried her Almond Shortbread cookies, which Rosie said was among her bestsellers. You can get three for $2, a dozen for $6, or two dozen for $10. 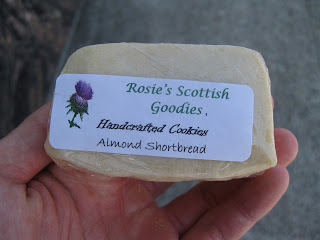 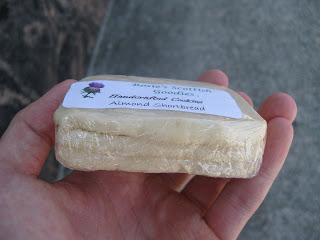 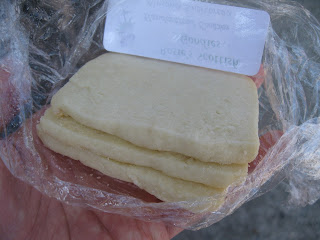 Her shortbread cookies were OK here. I think there's just a bit of a dryness to that shortbread cookie that left me pondering a bit on whether it had gone a bit stale. I'm sure it wasn't, but perhaps I should have also opted for some of her other cookies, such as Chocolate Ginger, Peanut Butter, or Oatmeal Pecan White Chocolate Chip.

For the chocoholic, Rosie has four types of fudge, selling a half-pound for $6.

Rosie also has savory choices like Zucchini Bread and Braided Asiago Cheese Bread. That'll be for when my sweet tooth doesn't act up.

After my second visit, I'll give Rosie's a passing grade, especially for the possible potential her other offerings could bring. I look forward to trying the savory treats next time. 6/10
Posted by Aaron at 5:44 PM