Killer Burger, located on NE Sandy Blvd. in Portland, Oregon, is a small burger-and-fries dive. They have a few unique burger options, such as the Peanut Butter, Pickle, and Bacon burger (a PBPB). While the PBPB may seem off-putting and odd to many people, it has gotten a number of rave reviews. 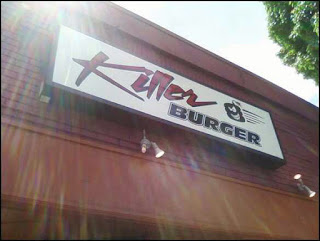 However, for my first burger experience at Killer Burger, I went for their spiciest burger, the "Marine." It's a 1/3 pound beef patty, with cheese, bacon, serrano peppers, habanero peppers, and ghost peppers.


First, I knew it would be spicy, so I went to Safeway for some Tums chewables. What a wise decision this was...seriously. 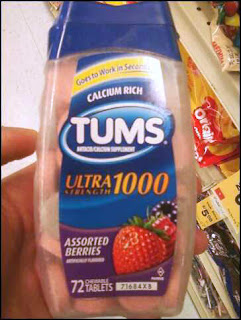 The place is very small, with a bunch of tables in a narrow space. 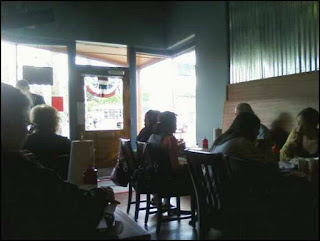 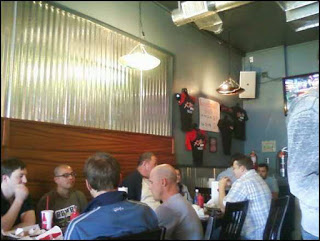 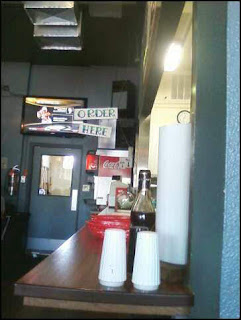 I ordered the Marine burger ($11.95), and the cashier pretty much immediately questioned if I was sane. Like an idiot, I ordered it anyway. And yes, I had to sign a waiver. 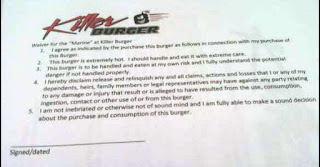 I grabbed a seat closest to the counter. The place was filled with people. There are only a few parking spaces in the lot right behind Killer Burger, and I ended up parking about four blocks away on a side street. Man, was that a mistake....

Anyway, after a few minutes, I basically had temporary celebrity status. The cook announced over the P.A. system that I was attempting the Marine burger challenge. Some of the people acknowledged me -- and probably thought I was some sort of nutcase for attempting the challenge. One guy came up to me wanting a picture of the burger; he even brought his son to the table to show him the Marine burger. 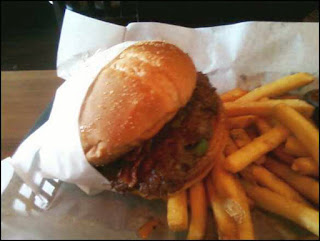 I got a large cup of water, and I was off. Twenty minutes to finish everything -- including that cup of hot sauce and the fries.

I utilized a similar strategy I took for the Flaming MOFO challenge at Ribslayer To Go: eat the fries first, then take apart the sandwich and eat it basically inside out with a fork and knife. I took the cup of hot sauce for the fries and doused the inside of the burger with it. Unfortunately, some of the hot sauce got on the fries. The fries were also fresh out of the fryer. Therefore, immediately, I was put behind the 8-ball with temperature-hot fries and spicy-hot sauce. My mouth was immediately on fire.

I probably should have just quit right there -- or not have the damn burger, period. But again, like a moron, I don't know when to quit on these challenges. So I pegged onward.

I finished off the fries in about two minutes. Then it was time for the burger. I cut off one piece and shoved it in my mouth.

The spicy heat came at me like Chernobyl, Hiroshima, and Nagasaki all rolled into one. To make matters worse, my strategy was practically foiled because the top bun -- which I had hoped would have some relief -- actually had MORE hot sauce on it.

One more thing: the burger was so hot and was incinerating my insides so much, whenever I took a breath to get some cold water, I could literally see the smoke emanating from my mouth. Trust me folks, it was that hot.

I was sweating profusely, snot dripping out of my nose. My tears burned. I blew my nose, and the snot coming out burned as well. I looked like a pathetic soul propped up straight on his deathbed. I didn't have milk on me, and I had stupidly left the Tums in my car. I kept on flagging the servers down for more water.

No one was keeping an official time on this one, but really, they don't need a time limit.

There were a couple of girls at a table across from me going "Go! Go! Go!" and I treated that as motivation.

Like a Marine, I kept pushing myself forward. No quit in this guy today. Somehow, miraculously, I reached the final bite. Even though my mouth refused to work properly, I forced the last bit of bun down my throat.

I was too much in pain to even take a picture of the finished basket (just trust me, I finished it, and you can ask the workers there, too). The server and the cook congratulated me on a job well done. Apparently, I was only the fifth or sixth person (to their knowledge) to complete the challenge. I have seen more photos on Killer Burger's "Marine burger" album (on their Facebook page), but regardless, it was a huge victory in my own epic battle of "Man v. Food."

But I undoubtedly lost the war. I kept drinking water, to no avail. I got a red popsicle on the house, but couldn't even open my mouth to properly eat it. My face and fingers had spice burns on them. I hung out by the counter in Killer Burger for a good 25 minutes afterward. This short exchange between me and Killer Burger's cook (a very nice man, by the way), says it all.

As I told my friend later on Google chat, I had to painfully walk back four blocks to my car, carrying two large cups of water with me. I looked pathetic, like I had just gotten sunburned on my face and dumped by a girl at the same time.

Again, DO NOT try this challenge! Killer Burger doesn't even put the Marine on their in-house board menu (but it is on their take-out paper menu). You can't order it to go, and the burger cannot even leave the premises.

(EDIT: The Marine is now on the in-house board menu, but you must still eat the burger there should you actually dare to order it.)

Killer Burger does NOT have milk there, and they don't have Tums or Pepto Bismol on hand. So if you *really* want to do this, bring your own.

It's been about 10-11 hours since I ate the Marine burger. Several Tums chewables and Pepto Bismol capsules later, I'm still reeling from the aftereffects. For the first time ever in a spicy challenge, my throat is just uncomfortable, almost like having a sore throat. I actually learned later that the back part of my tongue and near my throat area opened up a cut (due to the heat of the peppers). This is without question the spiciest thing I've ever eaten. And hopefully, there will be nothing I eat in the future  that will be that spicy.

I will say the fries were very good, nice and fresh from the fryer, slightly crispy on the outside and done on the inside. The fries were a bit oversalted for my liking, though. It's always nice to see the place packed, and while I do wish there was more parking nearby Killer Burger, people can park on the street, so it's not that bad -- unless, of course, you have to walk four blocks after ingesting a Marine burger.

I'm not giving Killer Burger a rating just yet. I will plan a trip to go back there for their Peanut Butter, Pickle, and Bacon burger, as it seems to be one of their signature burgers. I'm hoping to get the burger only...no need to eat the fries again. After that, I will post about my experience and officially rate Killer Burger. So stay tuned for a (much shorter) "Part 2" to this one. I'm not sure at this time when I will return.
Posted by Aaron at 7:46 PM